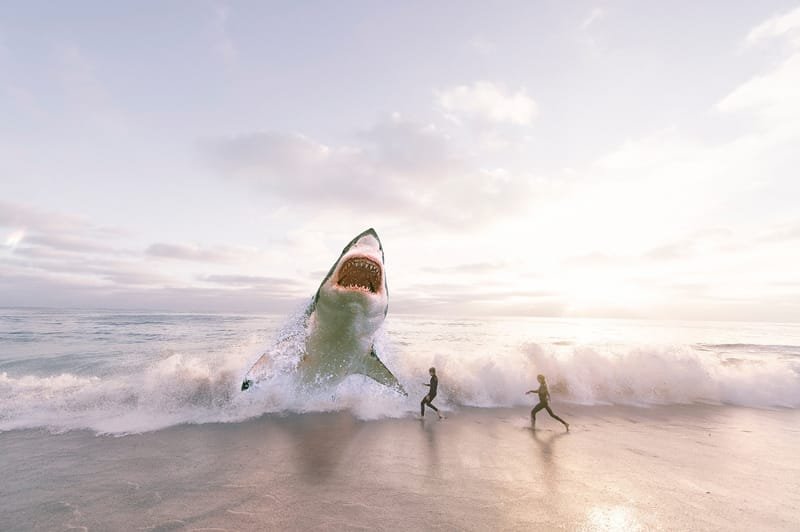 I am starving, I haven’t eaten for weeks.

I hover just above the surface, eyeing two lovely looking meals. All glistening and tasty. I can smell them from here, almost feel the blood pumping around their soft little bodies.

But alas, they are concerned by my presence it seems. A familiar story. Time to reach out, “I say there, you two. Yes you two! Helloooo, you are both looking extremely hot and scrumptious. Why don’t you come join me in the water? It’s most cooling you know.”

“God I want to get you back to the hotel room right now and…what is wrong my love, what are you looking at. I’m over here you know” cooed the groom.

“Is that a shark, honey?” replied the new bride pointing to the sea in front of them.

Right there, in the shallows of the ocean, was indeed a shark, staring straight at them. Its eyes cold yet focused. It’s bulk enormous.

“It is yes, how fascinating darling, really, it’s…ooh now where were we?” continued the new husband.

“Never mind that Hank, I swear that shark has been there a while, just bobbing about and staring right at us. It’s freaky. What does it want do you think?”

Hank laughed, “Celine, come on. Want? Food! But they don’t waste time eyeing up humans on land when there is plenty of foo…”

But then the shark called out to them, “I say there, you two. Yes you two! Helloooo, you are both looking extremely hot and scrumptious. Why don’t you come join me in the water? It’s most cooling you know.”

Celine and Hank looked to one another in astonishment before returning their gaze to the shark.

The shark span itself around in the shallow before emerging with its moonless night gaze.

Hank and Celine were dumbfounded, but not enough to stop Hank from getting up and wandering across the deserted sands towards the talking beast in the ocean. Celine followed meekly behind, muttering, "Sharks do not speak. This is insane. What are we doing Hank?”

Hank nodded, “Yes, it’s mad, absolutely. We’re not getting in, I just want to hear it again.”

Before Celine could stop him, Hank was at the water’s edge staring at the shark, bemused, “Uh, hey, did you just talk? Shark?”

“Is that like a yes? I swear you shouted over…”

“I did indeed young man! I’m glad you speak English. I was concerned you might talk in another tongue and I would sound foolish to you. I can only learn so many languages you know,” replied the shark.

Hank nodded silently, slack jawed before eventually spitting out a response. “How the frig, can you talk?” enquired Hank.

“Oh a long story dear boy, too long a story…although,” continued the shark conspiratorially, “I could whisper it to you, if you just get into the water.”

“Uh no. I mean you’re massive and could tear me apart in seconds. You're a shark. Plus you can talk! So that’s a no for me. Your lucky we can even respond at this point.”

“Well I quite understand. I appreciate I am not something you would usually encounter. My own kind steer well clear of me. I often try conversing with them down there but to no avail. I am alone, whether at sea or visiting land folk. Tis my lot in life,” finished the shark.

Hank and Celine both felt a moment of sorrow for this remarkable being. Celine studied it closely, unable to look past its sheer size and presence, floating so casually in the water’s edge. She gazed at its jagged razor sharp teeth, its magnificent jaws and ragged bloodied flesh around the nose. It must have been 20 feet if not more. It terrified her, but the fact this thing could talk and was so polite, had to be further investigated. For surely this was a miraculous find.

Hank continued, “If you could tell us just a little more about yourself, then we could find a way to communicate, without us getting in the water. If you understand our fear as you suggest.”

The shark beamed in genuine delight, “How wonderful! Why that would be just spiffing. I don’t need you to get into the water at all. We can simply chat just as we are, until the tide comes in. Perhaps we could meet again later in the week should you find my company pleasing. What say you!?”

Hank laughed, “I say yes! What a good idea. I mean, it’s not every day you meet a shark, never mind a talking one!”

The shark laughed gently, a wheezy warm soft titter, “Right!? You are the first humans to actually respond. I tried to chat with a fisherman last week but he simply stared at his whisky, shook his head then threw the bottle into the ocean before speeding away.”

Celine couldn’t help but laugh and the shark nodded, “Ha! Yes, it is rather funny when you think about it I guess.”

“Oh, I am sorry, I didn’t mean to poke fun of you,” replied Celine.

“Not at all sweet lady. Not at all. I appreciate from where you’re standing, I must look quite horrendous. But I hope my character and voice soothes you so.”

Celine agreed it did. How could it not? The shark spoke beautifully while its tone was calming. A tone that belied its appearance and was it not superficial to judge this unique creature so quickly?

“So, could you tell us your story, eh, what did you say your name was?” asked Celine.

“How impolite of me, I do apologise. My name is ‘Shrak.’ And you are?”

Hank and Celine formally introduced themselves, before Shrak told them the most spell binding story of his origins. Magic ancient cities under the sea, of entire aquatic populations rich in life. A kingdom in which he was a general. He’d served under Queens and Kings, with Mermaids and Sirens. He’d learnt all their tricks until they had died out. Eventually the fish lost language. He was the only one left from those ancient times that could communicate with humans. He regaled the couple with stories of the modern age under the sea, how climate change had impacted them all and how he wished to impart his first-hand knowledge of the damage humans were doing to all other life forms.

Hank and Celine were lost in his words and felt their minds bobbing off to Shrak’s dulcet tones and wondrous story. Hank even felt a little sleepy and opened his eyes, suddenly conscious he might appear impolite to his miraculous new friend.

Upon opening his eyes, Hank saw he was up to his neck in water and the day had passed. The hour was late, the tide had come in, with the sea ice cold.

Shrak emerged directly in front of him, vast and gigantic. Ocean water pouring from its endless back. It had Celine in its mouth. At least the top half, the rest of her was sinking below the reddening ocean surface.

Hank tried to scream but the shock left his efforts empty. He managed to splutter, “You…you promised!”

“I did no such thing. I also said we could chat until the tide came in. Well, it came in and here you are. Now…close your eyes, it won’t hurt. Much,” finished Shrak as it pushed out its jaws and dwarfed its helpless prey.