Inter galactic anti-social encounters of the nothing kind 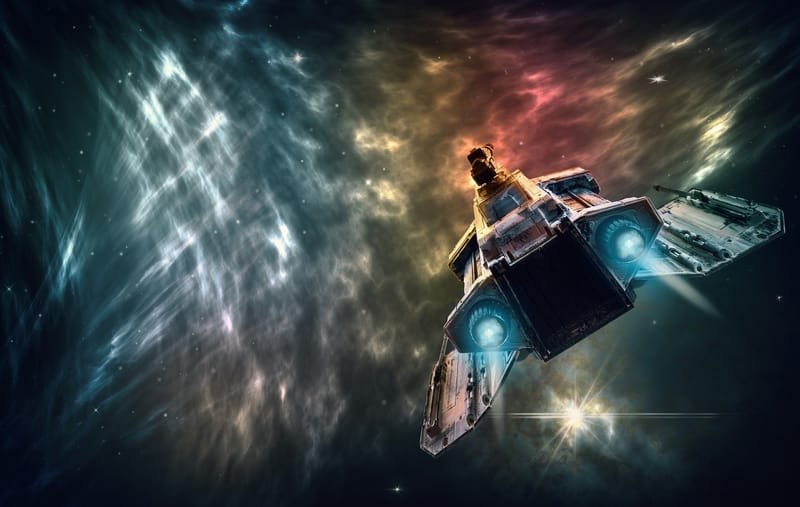 Have you ever stood on a cold, dead planet?

I thought not, but should you ever get the chance, it’s quite the experience I can tell you.

I’m Captain Morose and I’ve been wandering what I thought was the deceased planet of ‘Silonorgant.’

I needed time away from the company of others, even those I loved. The mere sight of anything alive had become unbearable to the point I’d either claw my own skin off or commit genocide. Again.

I have bouts such as these, occasionally, after leading my people into battle and vanquishing enemies. The Order wanted to psychologically examine me but being THE Captain, I told them politely to fuck off. You want me to kill and conquer, I do so mercilessly. But don’t expect me to stop my bloodlust on a whim…unless I get a long solitary holiday.

I’d identified Silonorgant as a place I could dwell uninterrupted until I was ready to return. I routinely take these breaks by locating remote lifeless planets. Somewhere I can be free of any hassle or wants. If one of these planets is about to go all supernova I treat myself to a box seat and watch on, satisfying further my desires to witness destruction.

On Silonorgant, I found me a nice old mountainous range. I had picked an especially rocky area as my camp. Even though I was the planet’s only resident, I still liked the cover this landscape offered me.

I was having a wonderful quiet time of it. No interruptions, endless terrains to investigate and maybe I could even map how all life started and ended on Silonorgant.

If there was a heaven, this was it, and it was all mine to roam in.

Until the planet’s version of summer came.  For when I said there were no life forms here and the planet was dead, it turns out that the seasons are very much alive.  Silonorgant has three seasons. Summer as I’ve mentioned, followed by spring before leaping into winter.

Now, the climate never changes and no new life grows or manifests itself.

But I knew it was summer because I awoke one night to hear, “IT IS SUMMER. SUMMER IS HERE. SUMMER COULD BE SO GOOD IF NOTHING LIVED HERE INSTEAD OF YOU!”

Startled out of sleep I leapt to my feet and raced to the edge, eyeing the dusty dead landscape around me. The voice continued, “IT IS SUMMER. SUMMER IS HERE. SUMMER COULD BE SO GOOD IF NOTHING LIVED HERE INSTEAD OF YOU!”

I felt the vocals rattle my innards and shudder my bones.  I whipped out my scanner, still no life signs, but that incessant voice contradicted the readings. There had to be a source.

“IT IS SUMMER. SUMMER IS HERE. SUMMER COULD BE SO GOOD IF NOTHING LIVED HERE INSTEAD OF YOU!”

It was unbearable. I couldn’t take the volume. I leapt into my ship and scanned the entire planet, using protectors to block out the noise. Only that maddening blaring sound still infiltrated and penetrated my ears with ease. It reached levels of shrieking I didn’t think possible.

I had to leave but I did so in anger, determined to return once this vocal season was over. I whacked the ship on autopilot and hovered around the planet, occasionally tuning in to its frequencies, picking up that horrendous incessant speech, “IT IS SUMMER. SUMMER IS HERE. SUMMER COULD BE SO GOOD IF NOTHING LIVED HERE INSTEAD OF YOU!”

After several meandering circuits of the globe, the sound finally stopped dead. The planet was once again silent and free.

I flew back, this time to investigate where the horrendous noise had come from.  But still no life signals, not one other living organism.  I decided to stay a little longer, to find the owner of that hideous all-encompassing voice. I slept in another dead continent, waiting. As time passed l began to forget the shuddering shocking hullabaloo and found myself relaxing.

Then it came again without warning as I slept peacefully, “IT IS SPRING. SPRING COULD BE SO GOOD IF NOTHING LIVED HERE INSTEAD OF YOU!”

Teeth gritted, ears protected, I blasted around the planet scanning the source. Every hole, crater, fissure, mountain side and frozen surface, combed. No nook or cranny was left untouched. Nothing. The level of investigation was no mean feat by the way, considering that noise growing louder and ever more nauseating.

“IT IS SPRING. SPRING COULD BE SO GOOD IF NOTHING LIVED HERE INSTEAD OF YOU!”

I felt jagged, raw and disconsolate then enraged and had to leave the planet again. I repeated the orbit trick and waited until it was safe to return.  I needed the solace this planet was supposed to give me. But instead I found myself chasing and obsessing over a harrowing sound of no source.

I had to know!

I returned once more when the voice had ceased. You can guess what happened. Surely?

Yes, the vocals of impossible volume blurted into life, announcing winter this time within moments of my settling down.

“IT IS WINTER. WINTER IS UNLIKELY TO BE THE FAVOURITE SEASON IF ANYTHING LIVED HERE. EVEN YOU! OH IT’S COLD. OR SHOULD BE. CAN YOU PICTURE IT? SHALL I DESCRIBE IT TO YOU IN ENDLESS DETAIL, ALIEN!? OR ARE YOU GOING TO FUCK OFF? LIKE NOW!!!”

My eyes felt as if they’d burst at any second, they bulged with agonising pressure while my ears bled! The magnitude of the sound would either drive me insane or turn my body to sludge. Maybe both.

I fired up the ship quickly as I could. Orifices bleeding, life draining in a blazoning racket.

“IT IS WINTER. WINTER IS UNLIKELY TO BE THE FAVOURITE SEASON IF ANYTHING LIVED HERE. EVEN YOU! IT’S COLD. OR SHOULD BE. CAN YOU PICTURE IT? SHALL I DESCRIBE IT TO YOU IN ENDLESS DETAIL, ALIEN!? OR ARE YOU GOING TO FUCK OFF? AH. GOOD.”

I blasted off of Silonorgant and into the atmosphere still in one piece, just. My hearing has not returned to full capacity since while I have terrible digestive issues.

Whilst leaving that treacherous hell scape, I still had the presence of mind to send out one final scan. A last desperate attempt to find the source of the eternal screeching stupid voice.

The scanner bleeped, with a message, which was strange as it is not designed to deliver messages.

ALIEN! Silonorgant here. The planet. Yes that’s right. I’m alive, me. I am Silonorgant and I live.  I detest all other life forms and even planets. That is why I’m all the way out here in the furthest reaches of time and space. To get away from the likes of you. Captain Morose indeed. So do kindly piss off and don’t bother my surface again.  Love….Not really, have you not just taken in a word I was saying. Never return. Silonorgant.

I had little choice but to leave and fly back to my system.  Ordinarily, I’d start fantasising about revenge, of trying to destroy that entire planet. But I was too weak and, well, a little shocked. An actual planet had spoken to me. Silonorgant was no different from I, it sought the same solitude and shared a beautiful dislike of just about all life, to the point it ensured none could flourish in its environment.

I realised then and know it now, I’m in love with Silonorgant.

And I must return.